9th International Contest of Caricature and Cartoon of Vianden 2016, Luxembourg

4 Entries: Initially, each participant can submit up to 3 entries in digital format by sending them via internet to the following address: cartoon@caricature.eu .
The author must include the following details in his or her e-mail: first name, last name, complete address, e-mail address, phone number and the title or the number of each submission.

The specifications for these electronic submissions are as follows: format JPEG, good quality, and max. 1, 5 MB per picture.

Out of these submissions, the jury will make a selection of 60-100 drawings.
Only the awarded artists will be invited to send the original work by mail.
All these works will be shown as prints at the exhibition and in the catalogue.
Their size should be between A4 (210x297mm) and A3 (297x420mm).
5 Technique: Free, black and white or in colour, without subtitles.
6 Prizes and Exhibition: The announcement of the prizes and honourable mentions will happen on 7th May 2016 in Castle of Vianden and the exhibition will take place in the Hall of the Knights of the Castle of Vianden from 7th May until 29th May 2016. There are plans to display the exhibits in the Museum of Caricature and Cartoon of Vianden and in other cities.
7 Returns: The drawings that were awarded one of the prizes will become property of the organizer.
8  Catalogue: The authors whose submissions are selected for the exhibition will receive a free catalogue by mail.
9 Results: The results will be published on the website www.caricature.eu on 8th May 2016.
The award winners selected by the jury will be personally informed via e-mail or by phone. The final decisions of the jury are incontestable.
10 Copyright: The selected participants give the organizers permission to use their drawings only for promoting the artist and the event itself. Every other aspect of the copyright remains with the artist (except for the awarded submissions). It ensures that the awarded works can no longer be submitted in other contests or published by their authors or third parties after the official publication of the results.

11 Generalities: The submitted work should not have been awarded or published before the deadline of this contest.

By taking part in this contest the participants accept the abovementioned rules.
12 Submission address for the awarded works: 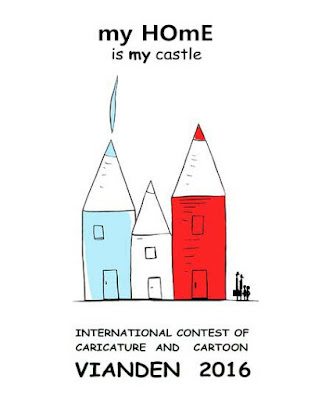