🔴General Rules and Regulations.. 2015 has been declared by the United Nations as the International Year of Light. Illuminating this subject with the light of the cartoon seems to us one of the best appeals to the artists..

General Rules and Regulations..
Main Subject:
THE LIGHT
Special Caricature Awarda:
Cristiano RONALDO
Ernest HEMINGWAY
1. 2015 has been declared by the United Nations as the International Year of Light. Illuminating this subject with the light of the cartoon seems to us one of the best appeals to the artists of humor.


This is an issue of sovereign importance, which also shows many inequalities that exist worldwide. The light of the sun and moon is the same for everyone.
But the other lights, electricity and all that goes with it, are the reason for the darkness in different parts of the world. This is the reflection that we intend to evoke. Come on with a humorous light! With the bright focus on progress and distortions in the spotlight and behind the scenes. In between is an undeniable truth: there is no light without shade!
2. Caricature Special Awards
Two great figures have been appointed for the 2015 edition of the Caricature Special Awards:
1 - The Portuguese football player (born in the Madeira archipelago) Cristiano RONALDO, a sports icon, winner of Golden Balls and Golden Boots;
2 - and the American writer Ernest Hemingway (1899-1961), Nobel Prize
for Literature, who participated in the First World War a century ago. This
participation, as a driver of the Red Cross and the correspondent of the Kansas
City Star newspaper, inspired him A Farewell to Arms (1929), an emblematic
work of his literary career.
The choice of this figures aim to target the ingeniousness of humour artists, and
arises from other designations made since 2013: Manoel de Oliveira and José
Saramago (in 2013); Nelson Mandela and Siza Vieira (in 2014).
3. In addition to participating with cartoons on the main theme, the cartoonists
can also send works for the FREE CATEGORY, as per the previous editions
4. The artists who do not wish to compete can send their works to the EXTRA-
-COMPETITION section informing of this decision.
5.
5.1. Works must be originals and any kind of graphical technique will be
accepted, including digital artwork, sent by Internet, if the prints are SIGNED BY
THE AUTHOR and if they are indicated as PRINT NUMBER ONE, or a original
to this contest
5.2. Can also be presented sculptures pieces of humour, in any kind of material.
6. The works can have at the maximum the following measures:
- in paper, 42 x 30 cm (DIN A3);
- sculpture pieces, 42 x 30 x 30 cm
The works should present on the reverse the following information: author´s
name and address, title, theme section and year. The author’s CV in Portuguese
or English (publications, exhibitions, prizes…) should also be sent.
Address :
PortoCartoon,
Estrada Nacional 108,
nº 206, 4300-316
Porto - Portugal
Organisation : MUSEU NACIONALDAIMPRENSA Portuguese Printing Press Museum
---------------
- Rules/PDF
- Rules/Google Doc.
- Türkçe Çevirisi İçin/Kozyurt Blog 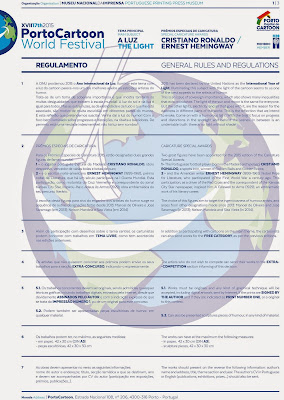 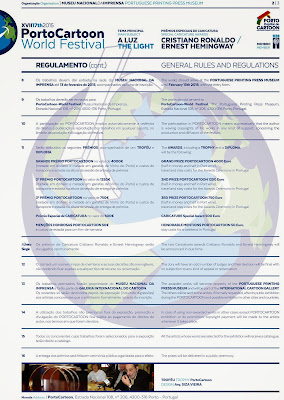 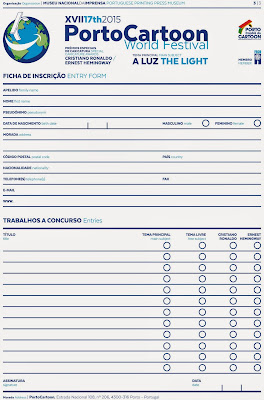 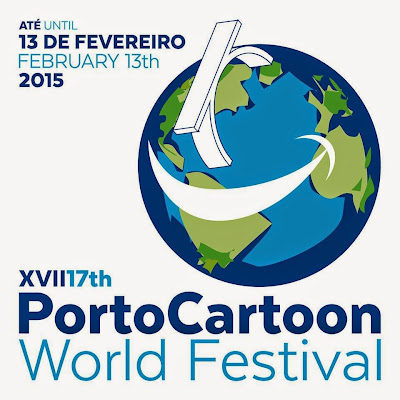